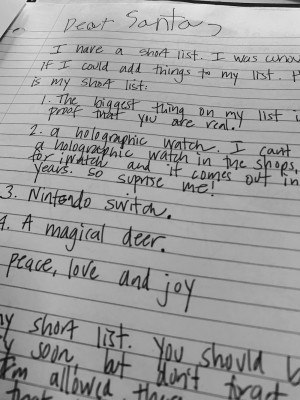 "Mom, can we write a letter to Santa?" Finn, my eight-year-old, asked on Tuesday night, walking over to me at the kitchen sink with a paper and pen. It was dark already, the candles flickering in our living room; the older kids had their binders out, finishing up their homework. I was tired and didn't really want to; I wanted the kids to get in bed so that they would get up on time for school in the morning. And I wanted some time to myself to attack the list of tasks that wake me up in the middle of the night: ordering the gifts for our out of town family and sealing the envelopes on the holiday cards while worrying about my mammogram results.

But I said, "All right, we can." He walked with me to the kitchen table with a notecard and a pen, his blond hair in need of a cut. When he was younger he had the most beautiful curls that would bounce when he walked, but now he wore his hair cut close to his head, not shaved, but no more curls, and his brown eyes peered toward me through a few strands of hair. I took the pen to start transcribing what he wanted to say. For some reason this was our habit, him talking and me writing, and this time I could barely keep up. He began:

I'm curious if you have found the holographic watch? If you have, please tell me what it is called so I can look it up on YouTube. Also, how is everything else doing on the list? Also, I was curious if the green elves are evil?

"Wait,” I interrupted. “Evil? Where did you hear that?"

"At school," he replied. That worried me, but I remained silent on the subject. I'd have to circle back another time and find out what this business of evil-talk was all about.

"Finn, so far you've only talked about yourself. What about Santa's feelings?" I wanted him to think beyond himself, to somehow instill gratitude into his life even while he was making a wishlist. He looked at me with a blank stare. He was so immersed in what he wanted for Christmas it seemed he hadn't given a moment's thought to Santa.

"Ask him about his reindeer, or if it’s cold up there in the North Pole," Gibson, my fourteen-year-old chimed in from the gray couch.

How are you doing up there in the North Pole? I'm trying to be as nice as possible starting right now. How are your reindeer? I plan to leave lots of carrots and cookies out on Christmas Eve.

He took the note and gently nestled it between the two doors at the front of our unlit fireplace, where we expected the elves to pick it up sometime during the night.

"Time for bath and bed," I said to the kids. "And Dad, could you fix the paper jam in the printer?" I sent the kids upstairs and dashed into my studio to type a quick Santa reply. I'd been using the same format for years: a small square icon of Santa printed on a small piece of paper.

"Gibson," I whispered. "Come check this out." Since finding out about Santa a few years ago when he read my text with his soccer coach telling the coach that the special jersey we were ordering "is from Santa, so don't say anything," he'd been impeccable about keeping the magic alive for Finn, helping me on all things Santa/Elf/Tooth Fairy/Easter Bunny related, even warning me if there’s a book or movie that his younger siblings shouldn’t watch because it might out Santa. We never really talked about how it felt to him to "find out," but at the time I felt awful about being the one who revealed the magic behind Santa so inadvertently and carelessly. Gibson never told me if he was hurt by that moment, but part of me still feels like it forced him to grow up too quickly.

I relished having him on this side of the truth, creating the magic with me. Since Gibson had crossed over to this side, we'd had so much fun creating magic together. We traded places: he put aside his homework and came into my studio to author Santa’s reply to Finn. I sat at our kitchen counter, placing stamps on the corners of envelopes and sealing real letters until Gibson called me back to the computer, showing me his completed response from Santa.

I printed the note, cut it to the small size to match the notes Santa had delivered in the past. Later, after I walked Gibson upstairs and got myself ready for bed, I quietly returned downstairs to swap notes. I wasn’t sure if Finn was asleep yet, so I carefully opened the fireplace doors to make no sound, took out his note and slipped in the new one. I checked the stairs to make sure he wasn't watching me.

The next morning Finn ran to the fireplace and discovered his note. Gibson had added a message in a secret code, so Finn immediately started trying to decipher it. He got about two-thirds of it done before I rushed him out the door for school. When he got home at the end of the day, he said, "Mom I need to check something."

I thought he was finishing the decoding project while I emptied his lunch pail and rinsed out his water bottle.

"I knew it. I knew it, Mom. I caught you!" I was at the kitchen counter, and he came in from the living room with the iPad in his hand.

"What are you talking about?" I acted oblivious, but my heart started to beat a bit faster, wondering if he had somehow found the note on the computer.

"I know you wrote the note. It was you. It's been you all along!" He had an excited expression on his face, but I couldn’t tell if he was laughing or about to cry.

"What do you mean, it was me?" I don’t want him to know this. He is eight years old.

"No you didn't. Let me see." Could he have done that? No, I don't think so. But something swelled inside me; something that made me think there was truth in his voice. No, please no, I silently whispered.

He turned on the video; I was dismayed to see our fireplace in the frame, and the fact that the video was over three hours long. He fast-forwarded until he saw movement and then played it at normal speed. We saw our cat walking through the room. Phew, I'm relieved the movement is the cat and nothing else. What time did I place the letter? It was late, there's no way a video could have kept recording that long, is there?

"Oh wait, that's not it." He fast forwarded again, and then I saw myself in my taupe nightie walking into the room.

"See, right there, see, you’re carrying a note!" He rewound to play that scene again, the one of me walking into the room. You can't see my face, but you can see my body, my hands and a small slip of white paper in my hand. I'm not a man in black boots, or a red little elf flying down as Finn was hoping to catch. In fact, I’m in my taupe colored nightie, the one with a rip in the hem and the frame catches just my backside. Not my most flattering moment.

He pressed play again, and we continued watching as I leaned over and carefully opened the fireplace, taking out a note and replacing it with a new one. And right there, in that instant, POOF, the magic of Christmas left my youngest child. He didn't seem sad about it; instead he seemed thrilled by his discovery, by the success of his spy mission.

I had to relive the moment twice more that day; once, when Gibson came home, and Finn retold the story to him, and replayed the video. “Mom,” Gibson’s eyes were wide, looking at me over Finn’s head. He was in disbelief, and I felt guilty all over again; guilty for falling to Finn’s prank, and guilty for letting Gibson find out all those years ago.

By dinner time, when my husband arrived home from work, I was armed with a glass of red wine as Finn played the video once again. My husband’s eyes sparkled with mischief, impressed by Finn’s technology skills.

But we were all shell-shocked. Finn was only eight; he was our baby and the keeper of all things "childhood." Suddenly we all felt a bit older, a bit more "adult," and I was yearning to hang onto those magical moments.

The next day, Finn asked, "Mom, can we still pretend like he is real, even though I know it's you?"

My heart melted a bit. I swept him up in my arms and squeezed his little body tight, his sandy blond hair nestled into my face. “Of course, Sweetie.” And we picked up the book

, one of the longest holiday books we have and one that I sometimes dread reading because it seems like it’s never ending. But this time, I slowed down and read each and every letter the little girl Holly writes to Santa, and each of his replies, and I watched Finn’s brown eyes linger over the pictures as we accompanied the main character on her journey to ride in Santa’s sleigh.


Lisa Witz grew up the youngest of nine children on a sprawling cattle and sheep farm north of San Francisco. She left the small town to feed her wanderlust, living in Japan, Spain and the Pacific Northwest. She now lives near San Diego with her husband and three children, and they often visit the farm to hike the trails of her childhood. When she’s not moonlighting as Santa, she writes personal essays. Find more of her writing here.

Our feet hovered above water as they dangled from the decrepit pier bruised by a hurricane from nature’s last season of wrath. I wouldn’t feel the sun’s angry impression on my skin for hours, but its intensity would keep me awake for several nights, eventually removing a layer of my epidermis, leaving my skin patterned like a doily.

Before the burn, there was this moment of beauty on the pier’s edge, my husband’s body at my side, his leg pressing into mine, my hand in his. Morning had been spent skimming...

When I was 16 years old, I didn’t want to hold my newborn baby. Instead of grabbing Kervin when the nurse...

This was truly my mother’s last journey. It started in the morning with her urn placed deep into my backpack. On top...

The spider jolted up and down like a yo-yo, industriously filling in a gap in the bush by the steps. Two large pine trees...

I tapped my foot nervously on the pavement, feeling the weight of the soccer ball against my instep. It was the only...

I type my name underneath his, then backspace it all. I stare at the blinking cursor, at the 421-page manuscript, at the...

"Mom, can we write a letter to Santa?" Finn, my eight-year-old, asked on Tuesday night, walking over to me at the kitchen...