The Orchard by Sarah Anne Childers 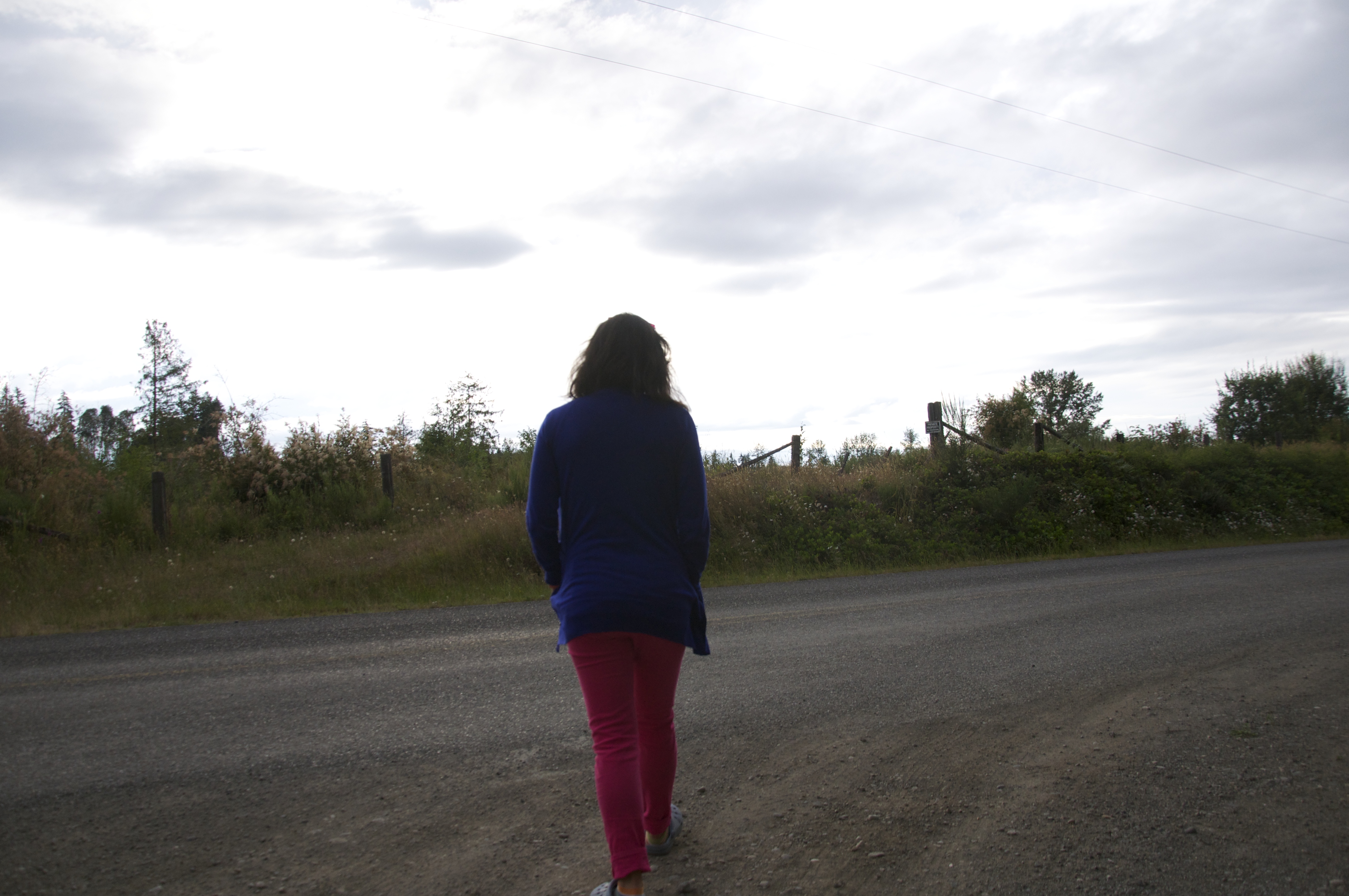 My mother and I confer about fruit. It’s an August morning midway through my visit home to Port Angeles on Washington’s Olympic Peninsula. The question we circle in the kitchen is whether we ought to pick blackberries or marionberries or even the last of the season’s tart blueberries. There is a berry farm in the valley that lies inland from the strip of frothed sea named after a Greek explorer who sailed in the service of a Spanish King. "Why not all three?” I ask, leaning with coffee against the counter. “Or why not pick what looks good?"

My mother is at the sink cleaning up after breakfast. She scrapes untouched food from my five-year-old daughter’s plate into the trash. A white dishtowel is slung over her shoulder. My mother frowns. "I really think we should have a plan beforehand."

The weather sours unexpectedly, and so we decide to swim at the aquatic center instead of forage. My mother and daughter are part mermaid; they can and do swim for hours.

Afterward, I drive us home from the pool on the old highway that weaves through fields of lavender and squat fir trees for Christmas time. My mother stares out the side window onto the neat rows of sachet filling and holiday decoration soaked by the unrelenting summer thunderstorm. My daughter sleeps behind us. The car is quiet and then, more to the glass than to me, my mother says, "One of my first memories is my father finding me alone in an orchard."

The sentence falls heavy and shotgun-crack-loud between us, like an iceberg calving. I turn from the road to look at my mother though the eighteen-wheeler ahead of us sprays fresh asphalt mixed with mud onto the car’s windshield faster than the blades can clear. They squeak with the effort. I know many things about my mother’s past but not about the orchard. I wait for what will come next in the car that smells of chlorine, suddenly unbearable, the air muggy from the shared damp of the rain and us swimmers. My eyes flick to the rear view mirror to see my daughter slumped forward in slumber, chin tucked to chest in a shape only the very young can assume. A chunk of hair, still wet, falls across her face. Sandals dangle from her toes.

"I was only wearing only one of my little shoes when my father found me,” my mother says, finally. “Neighborhood boys took me from my house and brought me to the orchard.” Her voice is the voice of an archivist, dusty and measured even as the stored history bleeds and screams.

My grandparents’ house stands in the middle of the block on Nectarine Street, but it was cherries and not the street’s namesake, that mottled hybrid of peach and plum, that grew in the nearest orchards. When my mother was young, children stole into the fenced fields and carried bags sagging with purple-red gems home to parents, who pretended not to know the story of the fruit.

The girl asleep in the car’s backseat after swimming loves cherries, and in July I buy a pallet-load several pounds at a time from the back of pick-up trucks driven into Seattle at dawn from east of the mountains.

As children in the ranch house on Nectarine Street, my mother and her Peter Rabbit brothers were allowed to dip into the loot they acquired from giant gardens not their own. They feasted in the kitchen because the sweet staining juice that dribbled over their chins would not harm the checkerboard linoleum floor, and in the front yard too where they spit sucked-clean pits at the peeling redwood’s trunk, but never were cherries brought into the living room with the pale overstuffed furniture in damask stripes zipped into clear plastic coverings to keep up appearances.

“I was three or four years old, small enough to fit in the kitchen sink because that is where my father bathed me after he brought me home from the orchard,” my mother continues in the car in the storm. “My father told me not to tell my mother. I was never to tell.”

"What happened in the orchard?" I must know.

"Did you tell your mother?"

In the car I do not ask what comes to mind much later, after we are home and unloaded, after the discussions of dinner and bedtime. In the car I do not shake those words No. Never. You did not tell your mother when she was here with us dying in your bedroom? You did not tell during all of those nights of shared insomnia before the morphine fog and the end that lasted a long time, actually, and then the end-end when the hospice nurses, those angels, came and I dragged a mattress up the stairs for you to sleep on beside the hospital bed but I think you stayed up all night sitting in a chair by the window, cracked open though it was November? No. Never.

In the car, I ask her what my grandmother would have done had my mother told. My mother knows the answer, speaks it immediately. "She would have gone wild.”

Wild. My chest compresses as if squeezed by slim fingers that fit perfectly between arched rib bones. The hands steal my breath but not my blood, and my pulse thuds in my ears until it overtakes the rain. The muscles of my thighs and shoulders twitch. I ache to throw off grasping hands and sprint to hunt for a little shoe coated in umber dirt abandoned among split, rotting fruit at the base of trees draped in fine net veils like brides. Leaden and silent beside my mother in the car, I ache for wild.

Even before my mother tells of the orchard, my grandparents are on my mind because of the man in the pool’s steam room. Older, trim and weathered and with a nose as beaked as a totem Thunderbird, he wears a necklace of jagged rocks tight around his neck. I step carefully past him to sit in the corner of the dim enclosure. Steam puffs from grates and gathers in beads on the ceiling and walls until, dense and coalesced, it snakes in rivers to pool on the sloped tile floor. It is just the two of us in the room. I close my eyes; he speaks to me anyway.

"When I commercial fished, there was always a steam room ready when we got off the boat,” the man says. “There was nothing better. We’d drink beer and steam for hours. Then someone would say, ‘Let’s go into town,’ but we never made it past the closest bar.” His rolling laugh fills the small space. "That was when I fished out of Humboldt Bay. I was on the beach once and a bush plane landed right on the sand. I stuck my thumb out to hitch, joking around that’s all, but the pilot waved me over.” I look over at the fisherman then. He holds out his thumb, grinning into the memory. “I climbed into that plane and we took off and flew along the bay,” he says. “The engine was so loud, we didn’t bother talking. Just thumbs up.” His smile fades. “That would never happen now. People are too paranoid. Back then people were nicer, and it was safe. There were more hippies around."

The fisherman pitches forward. Hands on knees, he is spring-loaded to stand but does not rise from the bench. He looks at me at me with narrowed eyes, assessing. "Maybe you know what I mean. Maybe your grandparents were hippies." I laugh, a short bark. “No, not them. My mother was the hippie,” and as I say this, stowing her neatly into a fraught designation because she’s not there to argue, I think of her thick black hair, loose to the center of her back and adorned with forest roses in the wedding picture framed on her dresser, then braided and tied with a ribbon in all the photographs made after the babies came. “She left home in California before she turned twenty and came north on the train,” I say to the fisherman. “Then she hitched west as far as she could go, all the way to the end.”

“Yes, yes.” The fisherman nods with force, understanding the local geography in a way that makes sense to folks on the Peninsula. As he does, drips of water and sweat release from the curled gray hair at his temples, and not for the first time I sense that a stranger fathoms patterns in the fragments of memory and family lore that I collect in conversations with my mother and painstakingly align into legibility only to have it scattered, shattered. I am as compelled as a monk crafting a mandala on the windy shore from grains of colored sand to sweep away rubble and begin again, but I do not have the holy man’s ease with sticky, clumping sand or detachment bordering on bemusement when the breeze lays waste.

The fisherman slips a hand under his necklace and pulls it away from his chest. “This thing gets hot in here,” he says, standing. He pushes the door open as a hazy figure pulls it from the outside. My mother shifts to let him pass but does not come into the steam room. “Little one is ready to go,” she says to me from the doorway and on cue my daughter peeks from around my mother. My daughter bounces from foot to foot, clutching her goggles and the bright rings she retrieves like a seal from the pool’s bottom. “I’m ready too,” my mother says. “All right,” I say. “Just let me get warm.” I want a few minutes alone. “Can I meet you in the showers?” Of course my mother says “yes.” Of course she will take care of the little girl, never letting the child out of her sight.


Sarah Anne Childers is a writer, editor, and educator. She grew up where the mountains greet the sea on Washington’s Olympic Peninsula and now lives in Seattle with her family in a box in the sky that faces west. Sarah’s short stories have appeared in Portland Review, and Pure Slush. She received Honorable Mention in Glimmer Train’s Family Matters Contest, 2015. Sarah is the Online Editor for Lucia Journal, where she is also a frequent contributor.

He was asleep. Arms resting at his sides, legs stretched toward the slats at the end of the crib. Blades of light cut through the blinds reddening tufts of blond as they danced over his head like twinkling embers. His wispy baby hair had grown into a miniature mullet, the ends swooping upward as if styled with a curling iron, the hair at his temples dampened by exhaustion.

There was a Riley shaped patch of sweat on the white sheet below him. As mothers do, I had watched him sleep more times than I could count. Only he wasn’t actually asleep. My eyes stayed fixed on his hair because it was the only part of his body that let me believe he was sleeping... 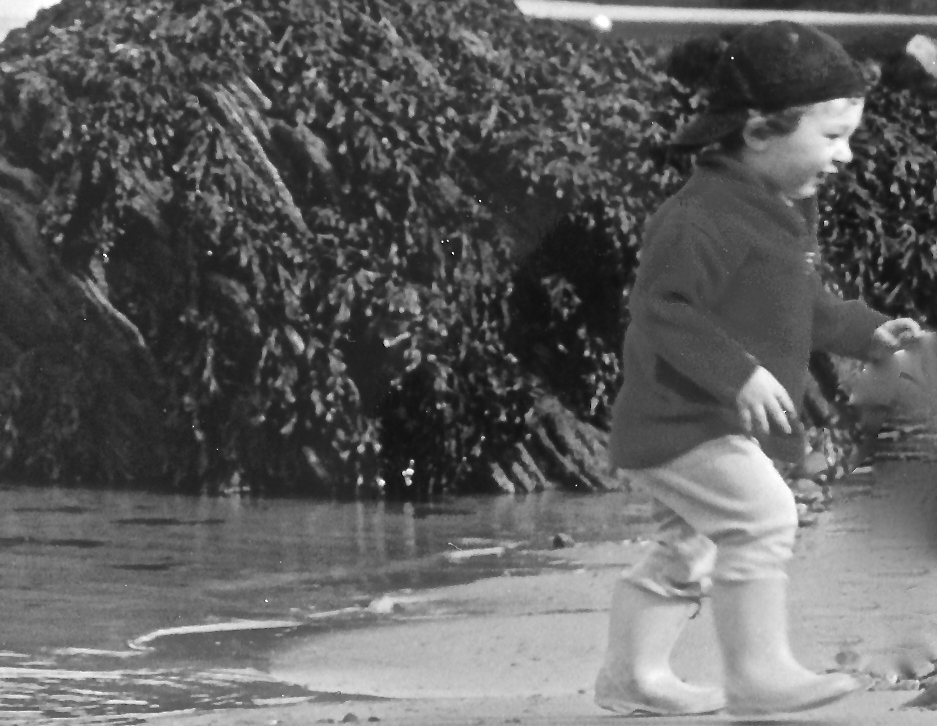 Even half asleep, my husband was quicker than me. He was out of bed and out the door before I’d put on my glasses, pulled a... 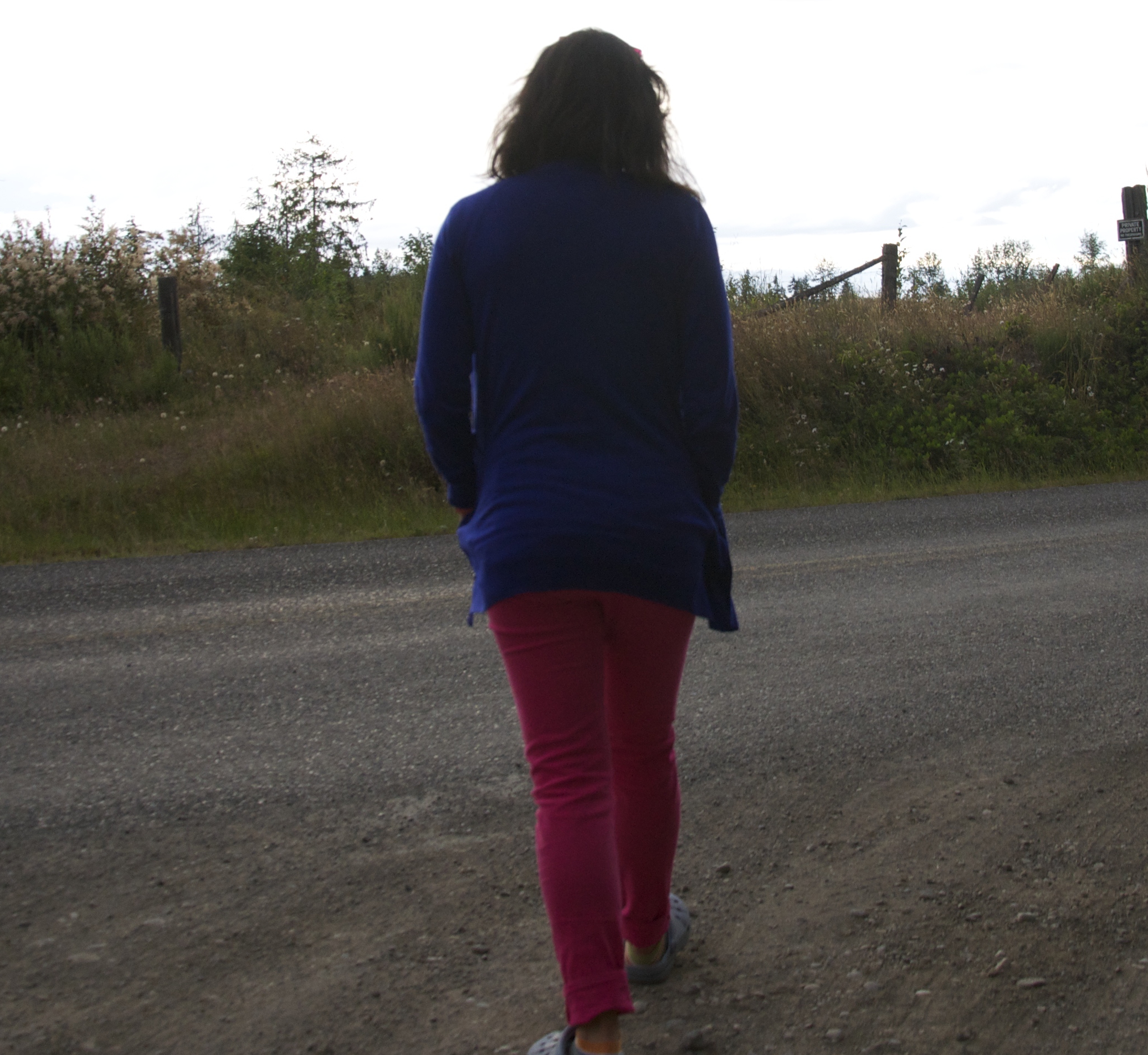 My mother and I confer about fruit. It’s an August morning midway through my visit home to Port Angeles on Washington’s... 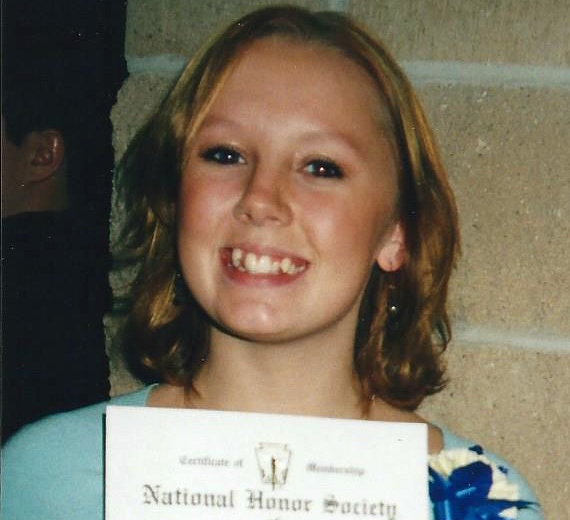 I always avoided venturing too far into the main floor of the house if I could help it, especially in the mornings. My musty... 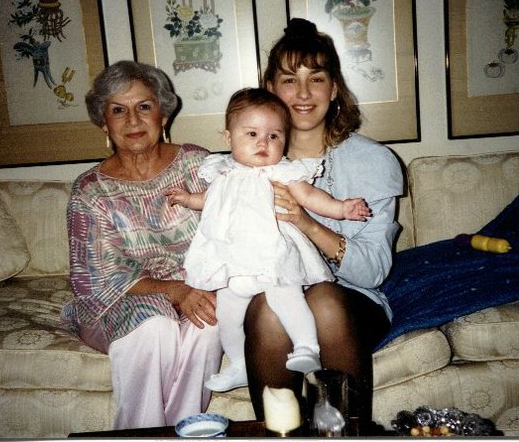 “Find your place,” the loudspeaker rang out as thousands of people swarmed onto the Washington Mall. “What do we want?” the.. 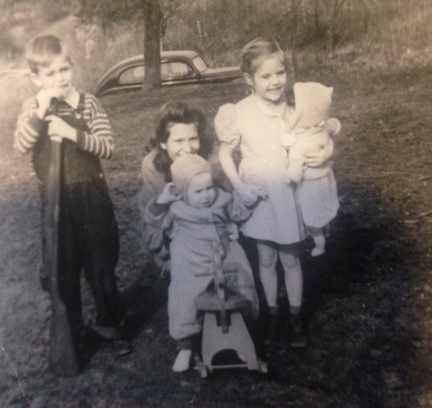 When Momma and Daddy eloped in 1938, The Great Depression still lingered throughout the coal fields and mill towns throughout...